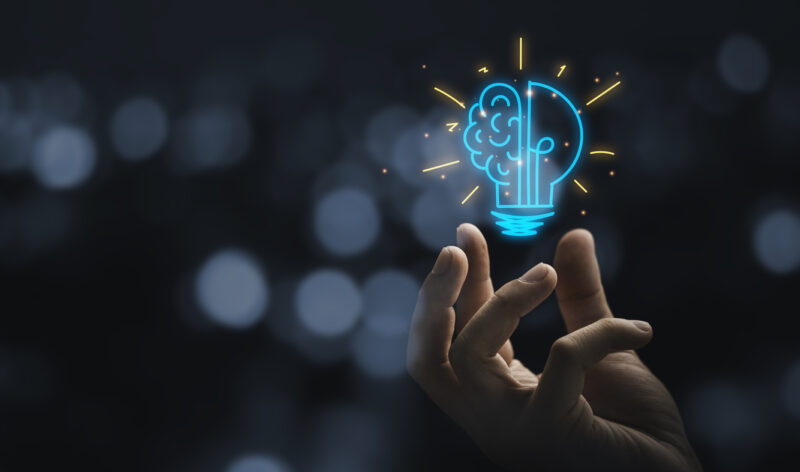 Dopamine is often referred to as the “feel-good” neurotransmitter because it’s involved in helping you feel pleasure as part of the brain’s reward system. It doesn’t actually produce pleasure, but it’s released when you feel pleasure, thus rewarding you and encouraging you to repeat that same behavior.

If you have a smartphone, you’ll know what this means. You look at your phone, find something of interest that gives you a jolt of pleasure, and put it back down. In no time, you pick it up again, looking for that same hit of dopamine, and continue this process repeatedly, always with the hope that something new pops up.

In the first case, you work on a creative project and with each step forward, you feel the pleasure of accomplishment. Dopamine encourages you to keep going by stimulating your motivation and concentration, and rewarding you as you go. This is the upside.

In the second case, you sit at a gambling table in a casino and throw your dice. The anticipation of winning stimulates dopamine and rewards your behavior, even in the face of loss. With repeated loss and attempts, you become stressed and anxious, yet you don’t stop. This is the downside.

The way to make the best use of dopamine is to encourage its natural production with healthy habits, so it does its job without negative repercussions.

The goal is to stimulate energy, focus, and motivation while maintaining emotional equilibrium and a sense of well-being.

The wrong way to produce dopamine is via drugs like cocaine, excessive gaming, gambling, or any activity that has a potential for addiction.

How do I know if I’m low on dopamine?

The most common symptoms of dopamine deficiency are:

Many of these symptoms can have other causes, but it doesn’t hurt to increase your dopamine naturally to see if you can get some relief.

Here are seven things you can try.

Exercise, particularly aerobic exercise, increases dopamine, serotonin, and norepinephrine levels (Ratey, 2008). You get the benefits of all three simultaneously in a balanced symphony of performance.

Dopamine and norepinephrine supply energy, arousal, attention, motivation, and reward. Serotonin keeps your mood steady and impulsivity in check. You get the perfect cocktail to produce calm energy, inspiration, and a sense of well-being.

Brisk walking, a turn on the treadmill, or any full-body activity such as dancing, running, or playing tennis can set you up to perform well on activities that require concentrated focus and brain work. Think of it as happy motivation with laser attention.

Other exercises that enhance dopamine and serotonin production are Yoga and Tai Chi. These exercises improve balance, a lack of which is one of the signs of low dopamine.

Several studies show the positive effects of meditation on dopamine production. One study found a 65% increase in dopamine release during the performance of Yoga Nidra, a particular type of meditation known as “yogic sleep.” It involves intense relaxation.

A second study conducted on Transcendental Meditation showed that regular meditation resulted in a decrease in “anxiety and stress (due to the decrease in cortisol and noradrenaline levels), and increased sensation of pleasure and well-being (due to an increase in the synthesis and release of dopamine and serotonin).”

The third study on mindfulness meditation found an increase in dopamine and melatonin and a reduction in cortisol and norepinephrine during meditative states.

Although all of these studies used relatively short time frames for finding their results, your best bet is to make meditation a regular daily practice, even if only for 10 minutes.

Consistency is more important than the amount of time. You can increase as you go, but start small and keep it going.

Several research studies have shown that listening to music we love or that “gives us chills” is accompanied by a dopamine release in the brain’s reward system. Interestingly, the dopamine release seems to occur when we’re anticipating a favorite part of the song or piece during the time leading up to it.

The release of dopamine often occurs in response to anticipatory thoughts and emotions. Looking forward to a future event, the climax in a piece of music, or a good grade on an exam all reward us emotionally.

I play my favorite classical music when I cook but never put together the idea that this ritual increased my dopamine production. Likely the same thing happens when someone combines exercise with their favorite playlist. In that case, you get a double whammy!

Sunlight is a tricky proposition, especially for those of us who live in more tropical climates. You need it, but you must be careful not to overdo it because of the dangers associated with skin cancer.

Yet, not getting enough sunlight affects your levels of Vitamin D and the production of mood-boosting neurotransmitters in your brain.

One study followed 68 healthy adults who received more sunlight exposure than a control group for 30 days. The first group had the highest density of dopamine receptors in the reward areas of their brains.

The rub, of course, is that you can get similar results in tanning beds; however, these come with dangerous side effects and can be addictive.

The bottom line is some regular sun and Vitamin D supplementation. However, make sure you have routine bloodwork to check your levels of Vitamin D if you are supplementing.

These amino acids are found in protein-rich foods. If you’re a meat-eater, you get them from these and some dairy sources. If you have a plant-based diet, you can get adequate amounts of tyrosine and phenylalanine from soy and legumes. Tofu is an excellent source! Bananas and avocados are also excellent sources!

Research has indicated that diets high in saturated fat negatively affect dopamine transmission (the transmission of signals between neurons). Further, “obesity has been linked to reduced dopamine release and reuptake,” (Wallace & Fordahl, 2021).

In other words, reduce saturated fat in your diet. Stick with mono- and unsaturated fats. If you eat whole foods as much as possible, you automatically reduce fat.

Sugar increases dopamine. However, if intake is regular over time, an opposite effect occurs: the number of receptors reduces, and dopamine release may be negatively affected. Stick to fresh fruits if possible. They’ll give you a boost in glucose which is a source of energy. As always, moderation is a good policy.

Dopamine is associated with wakefulness, and in the natural cycles of sleep, dopamine release decreases at night when you’re going to sleep and is more active in the early hours of the morning before waking up.

However, you throw everything off when you disrupt sleep patterns by either getting too little sleep or sleeping at odd hours. Studies on sleep deprivation have shown changes in our D2 receptors, which are the receptors associated with wakefulness. D2 receptor binding was found to be lower in sleep-deprived people, meaning decreased amounts of dopamine.

All of this just means getting good sleep during regular sleeping hours (between 10 and 7), and going to bed no later than midnight (if you can sleep until 8).

As always, I hope you have a great week!