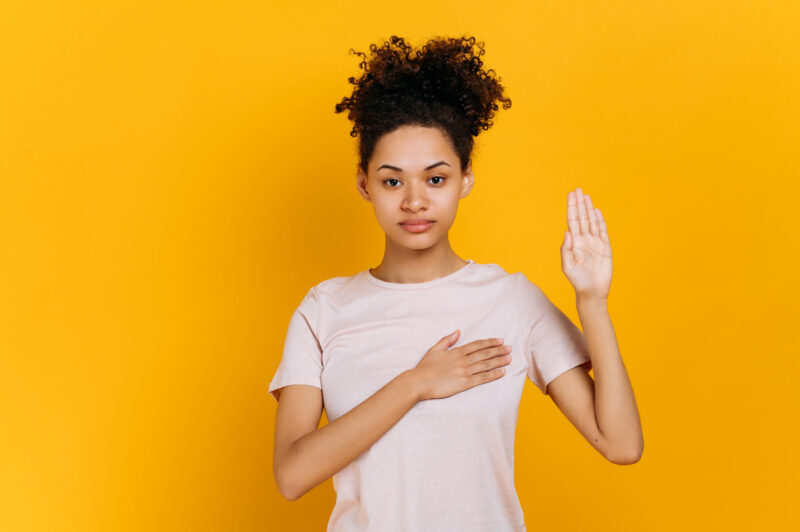 Is there ever a time when lies are okay?

Some people believe white lies told to protect someone’s feelings are okay, and others think we should never lie, no matter the situation.

You have to decide for yourself whether lies are okay in certain circumstances. Brutal honesty is often not the right choice. I lean towards being truthful yet using tact in situations where total honesty could be hurtful.

Today I’ll give you a list of strategies to avoid lying or stop lying if it’s an issue.

For starters, if you find that lying is something you engage in more than you’d like, and it’s habitual in some circumstances, take some time to review your history. Many people learn to lie growing up.

For example, when I was growing up, avoiding hurting someone’s feelings was a desirable value, and telling white lies for that purpose was acceptable and encouraged. If someone asked you if you liked their new haircut, you would say it looked great even if you didn’t think so. Lying, in this case, was considered being kind.

You might also have learned to lie as an adaptive strategy to avoid conflict. People who grew up with a volatile or abusive parent lied to avoid severe punishment or physical or emotional abuse. It was a safety measure in these cases.

Others learned to lie because they perceived their parents didn’t want to know the truth. These kids recognized that their parents weren’t able to handle problems and often reacted to them with significant anxiety. They’d rather not know.

In all these cases, lying was an adaptive strategy in childhood but is no longer effective as an adult.

Habits take significant effort to undo and replace, and chronic lying requires consistent efforts. The first step is to recognize the problem and commit to changing it. Don’t spend time being hard on yourself about it, but take action instead to correct it.

Step 1: Figure out why you lie.

Using our list from last week, which you can access here, identify why you lie. Ask yourself these questions:

People who lie habitually sometimes lie for no apparent reason. It’s a habit that occurs almost involuntarily. Research, however, has shown that most people attempt to be truthful and are honest most of the time. You might find that one or two specific areas compel you to lie, and it’s good to identify what they are.

Step 2: Make a plan to focus on truth-telling.

There are two parts to this:

A common reason for lying is to get out of something you don’t want to do, or that’s awkward. Here are some examples.

A work friend is chatting your ear off and won’t let you get a word in. You had planned to leave the office early to get home and relax before dinner. It’s okay to say, “I’m sorry, I’ve got to go. I need to be home earlier today. I’ll chat with you tomorrow.” That’s all true. You don’t need to explain any more than that.

You’re afraid someone will become angry with you.

Your partner spoke to you harshly in a social setting where other people heard. You’re upset but don’t want to say so because you’re afraid he’ll get angry and defensive.

You have a right to your thoughts and feelings and to be treated well. It’s necessary to learn to bring up upsetting or contentious matters.

You can wait a bit or do it when you think the receptivity is better, but it’s not good to let it go.

If you’re involved with someone with significant anger issues, get some help and let them know it’s not okay and can’t continue. If safety is an issue, then, by all means, get help before tackling this.

But if you generally tend to give in to other people to avoid upsetting them, work on setting boundaries rather than lying or omitting important information.

How does lying work out for you? It might get you off the hook for something temporarily, but it has a residual effect that stays with you. Some possibilities are:

Step 5: Make a distinction between self-deception and deceiving others.

Self-deception is a particular type of lying that most people don’t put in the same category as lying. Yet it is a type of dishonesty that’s detrimental to you and ultimately to your relationships with others.

Identify ways you deceive yourself. It’s easier to be truthful with others if you’re first honest with yourself.

Step 6: Make this vow to yourself.

Make a vow to become someone who tells the truth, is known for being honest and forthright, and can be counted on to do what they promise.

How to “Lie-Proof” Your Relationships

This is a more extensive subject, but I’ll give you a quick list of characteristics that apply.

For more on relationship building, I refer you to John Gottman, an expert in this area.

I’ll close today with a quote from William Shakespeare:

“Honesty is the best policy. If I lose mine honor, I lose myself.”